Hello, in this article, I will give you a quick tour of a project that I recently resurrected from the dead to collect the French presidential election online data on Twitter and Google trends. The article will go through the new pipeline I designed (with the original design), the monitoring, the datasets produced/shared, and potential enhancements.

The original project was developed in 2017; I discovered the AWS free tier plan and the API of Twitter (with Tweepy).

All the code mentioned in this flow is here, but there are the main steps: 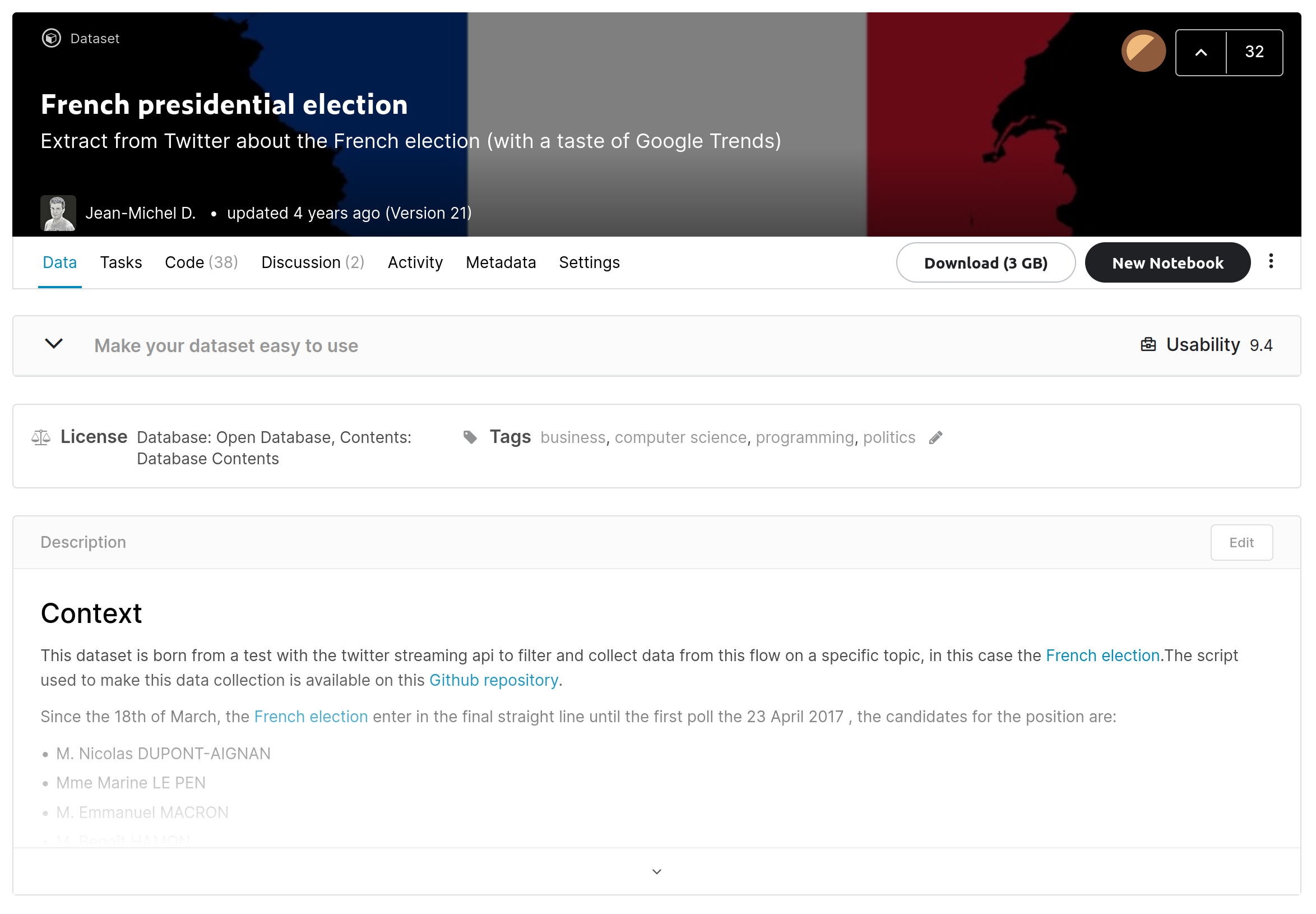 So that was the original pipeline, not perfect, but it was doing a great job and allowed me to answer an interview for Kaggle for that #brag.

So now, the election is coming soon (the first round in April 2022); I wanted to relaunch the project but make it better. Everything starts with an EC2 instance for the computation (our focus for this part); there is the overall flow.

The environment to run the code is in python, and details are in this YAML file, notice that the Tweepy version to run is 3.x where the newest one is 4.x.

Multiple parts are in play for the computation, but the core (if we put scripts away) is composed of :

On this file, there is a field related to AWS with the key/secret that is an IAM role with only writing rights on the s3 bucket mentioned also. The second section is for twitter with the secret and token related to an application that I built on the Twitter developer portal to access the streaming API.

As you can see, for each entry, there are different pieces of information:

Both scripts consume these resources to collect the data online, and it’s more flexible if I need to make about on the pipeline like location to write on AWS or scope of the candidates.

Let’s have a look now at the pipelines directly.

This code is very close to the original one. The information related to the candidates is now in a configuration file, and I am using pandas to aggregate all the tweets before sending them to S3 with boto3.

The main changing point is the collection frequency; now, this script is collecting during 5 minutes everything 5 minutes the tweets related to the candidates kind of a near real-time data pipeline with a 5 minutes delay.

For this one, that’s a new thing to replace my manual process, and I am leveraging the pytrends package to link my machine and Google trends.

The idea of this flow, if you have a look at the code here, is to give:

The idea is to collect for all the candidates (based on their names) information stored on Google trends about them around:

Now all the sources are connected to my S3 bucket dedicated to this project; something to consider is how the data is structured on S3 for each of these sources. I decided to store the data in “subfolders” for each source’s day level (very standard). I wanted to have also more visibility on the life of my pipeline, so I started to build a quick application to monitor the data sent to AWS.

To monitor my pipeline, I decided to leverage an amazon package that I used one year ago in my sagemaker experiment called chalice. First, there is the Github description: Chalice is a framework for writing serverless apps in python. It allows you to create and deploy applications that use AWS Lambda quickly. It provides:

In my case, I wanted to have something useful for myself to monitor the data coming in my other s3 buckets for other projects, the code is here, and there is the overall flow.

The idea is to check every 4 hours if, for all the projects, the data received for a specific project on the current date is fresher than the time threshold, and if not, I am sending a message on my phone by the service SNS.

The process is simple, generalized across all my projects using the same way to partition data (at the day level). It helps me debug and does not force me to look at my pipeline every day to check that everything is OK because the rule is simple (#alertingisthebestmonitoring).

With this pipeline, I also wanted to make this data available for everybody, and I again decided to leverage Kaggle.

The dataset is here, and there is the structure of the dataset.

The goal is to have:

I plan to add new data in Kaggle until the new president’s inauguration in May 2021. For the refresh. I will start with monthly updates, but the time window may change based on the election status.

In terms of analysis, I will do an elementary analysis to promote the new data, but my analysis will happen after the inauguration to understand the connection between users and tweets.

The data related to Google trends are still in progress, I needed to make some adjustment to handle different levels of aggregation on the trends and keep a similar script (should be completed for December 2021)

With more time, motivation and fun

This project has been running since mid-November, and I had some thoughts about possible improvements (that will maybe happen):

Finally, the streaming question, I see people saying, “Jean-Michel, you should build a streaming pipeline with Kafka … “ and I say NO. My stack is adapted for this application and offers a reasonable ratio learning curve/cost to run. Having a streaming pipeline could be exciting, but for particular moments like during a debate but not in my case so I will maybe explore something in the future (like kafka) but nothing short term.

Globally there are a few takeaways from this initiative:

I am also really curious to see how people are going to interact with the dataset and I will make a few updates to make it easier to use (adding more data and information).